We shoot two different rounds over winter, which are entered into postal leagues against other clubs around the region (DCAS league) and country (Selby League).

Indoors we shoot the Portsmouth round, which is 5 dozen arrows on a 60cm target face at 20yds. To fill the teams, we need a minimum of 6 recurve, 3 compound, 4 longbow, & 3 junior (1 may be compound).

Outdoors we shoot the Frostbite round, which is 3 dozen arrows on an 80cm target face at 30m. To fill the teams, we need a minimum of 6 recurve, 2 compound, and 4 longbow scores (although for DCAS, we need a total of 9 senior scores which can include up to 3 compound), and 3 juniors, 1 of which can be compound.

This is not just a competitive league, but a reason for us to get together as a club and shoot at the same time. We will be shooting the Frostbites on the first Sunday of every month and the Portsmouths in the first week of each month. There are quite a few members who shoot more than one discipline so they can shoot their second (and third) rounds at another time in the month.

We will be lighting the BBQ after shooting the Frostbite so please feel free to bring something to throw on after we shoot (bacon sarnies are especially suitable after a cold morning shooting 😉).

Don’t forget, we are shooting indoors at Trebudannon on Wednesdays and Fridays with sessions starting at 4:30pm and 6:30pm.

You will still need to book to shoot for both the Frostbite and the indoor sessions.

Since we came back from lockdown and have been lucky enough to shoot again, it has been fantastic to see so many of our members taking advantage of the booking slots available and shooting at different times throughout the week. The down side of this is that we don’t see so much of each other any more. You may have seen that the guidelines have recently been relaxed a little to allow two people from different households to shoot on the same target (maintaining social distance of course). To celebrate this we’ve been trying to come up with a way to get people back to shooting socially again.

Like a lot of clubs, we’ve missed out on running our annual open tournament this year, but that doesn’t stop us from running something within our own club. We have come up with something that, as far as I’m aware, we’ve never tried before: a knockout tournament. Unlike most tournaments, this won’t be restricted by round or age group. This will be run using the handicap system to make it a fair and level playing field for everyone. What that means is that the competitors can shoot whatever round they like from a York down to a Short Junior Warwick and the allowance granted by the handicap system will make the scores comparable. The only rules are that you must have a handicap before you shoot your matches and the matches must be shot at the same time as your opponent. There will be a time limit on how long you have to shoot the matches, eg. The first match must be shot within 3 weeks of the draw, etc. But that will all be announced as we go along.

For now, if you would like to take part in the first ever Bowmen of Wadebridge Shoot What You Like (BOWSWYL) Knockout Tournament, please register with me by email (robwilliams01@gmail.com) stating your name and bowstyle. If you shoot more than one bowstyle you can enter once for each style if you like.

If you don’t know your handicap or don’t know how to get one, please get in touch with me and I can explain.

It is with regret that we have taken the decision to cancel our tournaments for this year.

As you may be aware, we had planned to hold a UK Record Status Double WA70m on Saturday 4th July as well as our usual Mixed Herefords tournament on Sunday 5th, however the restrictions that we have had to put in place to maintain social distancing mean that this is no longer possible.

It is our intention to mirror this year’s plans in 2021 on the weekend of 3rd & 4th July and if time and restrictions allow, we may hold a fun event later this year.

Every year we enter teams into the Selby League summer postal tournament. Usually this is shot as Short Metrics for recurve archers and Nationals for longbows. This year, due to the coronavirus outbreak, the rounds have been changed to enable them to be shot without moving distances.

We have entered 2 recurve teams (team A will be the top 3 scores and team B will be the next best 3 scores) and a longbow team (best 2 longbow scores). The round for both recurve and longbow will be a Metric 122-50, which is 6 dozen arrows at 50m on a 122cm face.

The target currently at 70m (lane 7) will be moved to 50m for the week from 25-31 May. Please get your round shot in this week and submit scores to John Tizzard as usual.

Not everyone is going to be able to shoot all the time at the moment so it is important that we get as many scores in as possible, even if you don’t think yours will make the team – you may be pleasantly surprised!

Further to Archery GB issuing guidance for clubs to re-open on Wednesday 13th May, the committee has now taken the decision to re-open the outdoor range from Monday 18th May with certain restriction and regulations in place. Please click here for the full information on how we will be managing the return to shooting through Covid-19.

Well done to everyone who entered scores for the January Portsmouth Postals. The teams this month were:

Well done to everyone who came along to shoot the January Frostbite. The teams this month were:

The 2018 Open Tournament was held on Sunday 1st July. In true B.O.W. style, we may have been in the middle of a heatwave, but that did not stop us from laying on the traditional morning downpour! Senior ladies and gents all shot Herefords, while juniors shot the appropriate Bristol rounds for their age group. END_OF_DOCUMENT_TOKEN_TO_BE_REPLACED

Archery GB’s Big Weekend is a national initiative to increase awareness of archery within local communities. We ran a single day session at our club ground at Colquite, giving everybody in the Wadebridge / Bodmin / Camelford area the opportunity to come and have a go at archery. The day proved very popular, especially among the younger aspiring archers. We also took the opportunity as a club to test out our skills in the various disciplines, with longbow archers trying their hand with a compound bow and even some brave recurve archers foregoing their sights and having a go at the more instinctive styles. END_OF_DOCUMENT_TOKEN_TO_BE_REPLACED

In true patriotic fashion, we celebrated St. George’s Day by getting together and shooting… a St. George! END_OF_DOCUMENT_TOKEN_TO_BE_REPLACED

bowmenofwadebridge
•
Follow
We've had great fun this week shooting at snowmen and dusting off some classic archery gear. Merry Christmas from the Bowmen of Wadebridge
View on Instagram |
1/9 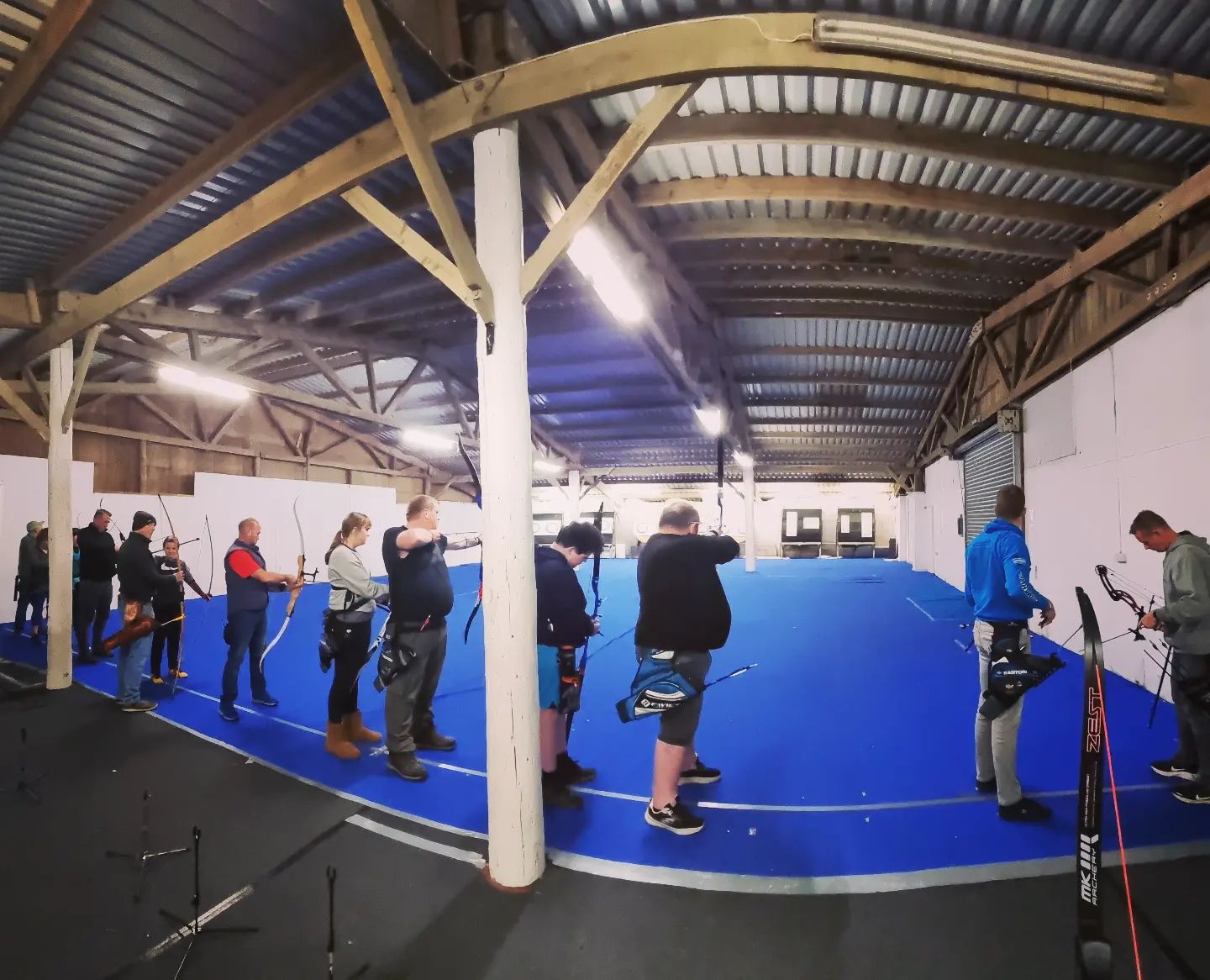 bowmenofwadebridge
•
Follow
A few photos from our end of season shoot today. Well done to everyone who took part.
View on Instagram |
3/9 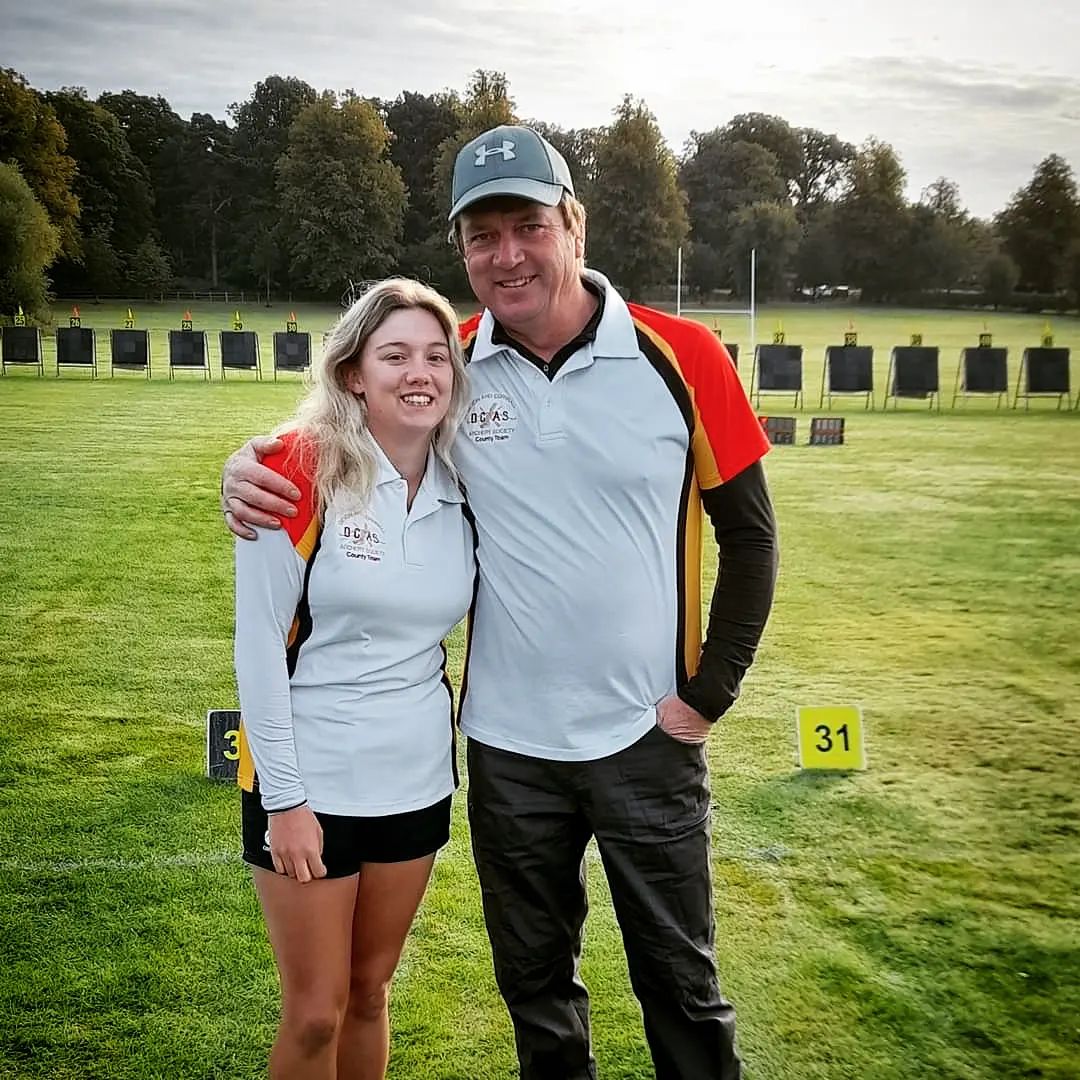 bowmenofwadebridge
•
Follow
Andrew and Choe had a great weekend up at the National Intercounties Tournament. Lots of top archers and around 240 archers in total. DCAS done themselves proud. Lots of great scores, medals for some and great support for each other. Well done to you all, you were awesome. No medals for Andrew and Chloe but Andrew finished 2nd in the ranking round on Saturday and 4th in the Mens team. Chloe finished in 8th place in the women's ranking on Sunday with a new PB of 659, getting her WA red target award, and beating half of the mens scores. A lovely end to the outdoor season. - photo and write up by Karen Scott
View on Instagram |
4/9

bowmenofwadebridge
•
Follow
A fantastic effort by team BOW today at Exeter Company of Archers for the DCAS Grand Day. Great to see friends from all over Devon & Cornwall once again. Well done to Chloe, Saffron and Andrew for winning their categories and Heidi for coming 2nd in hers.
View on Instagram |
5/9 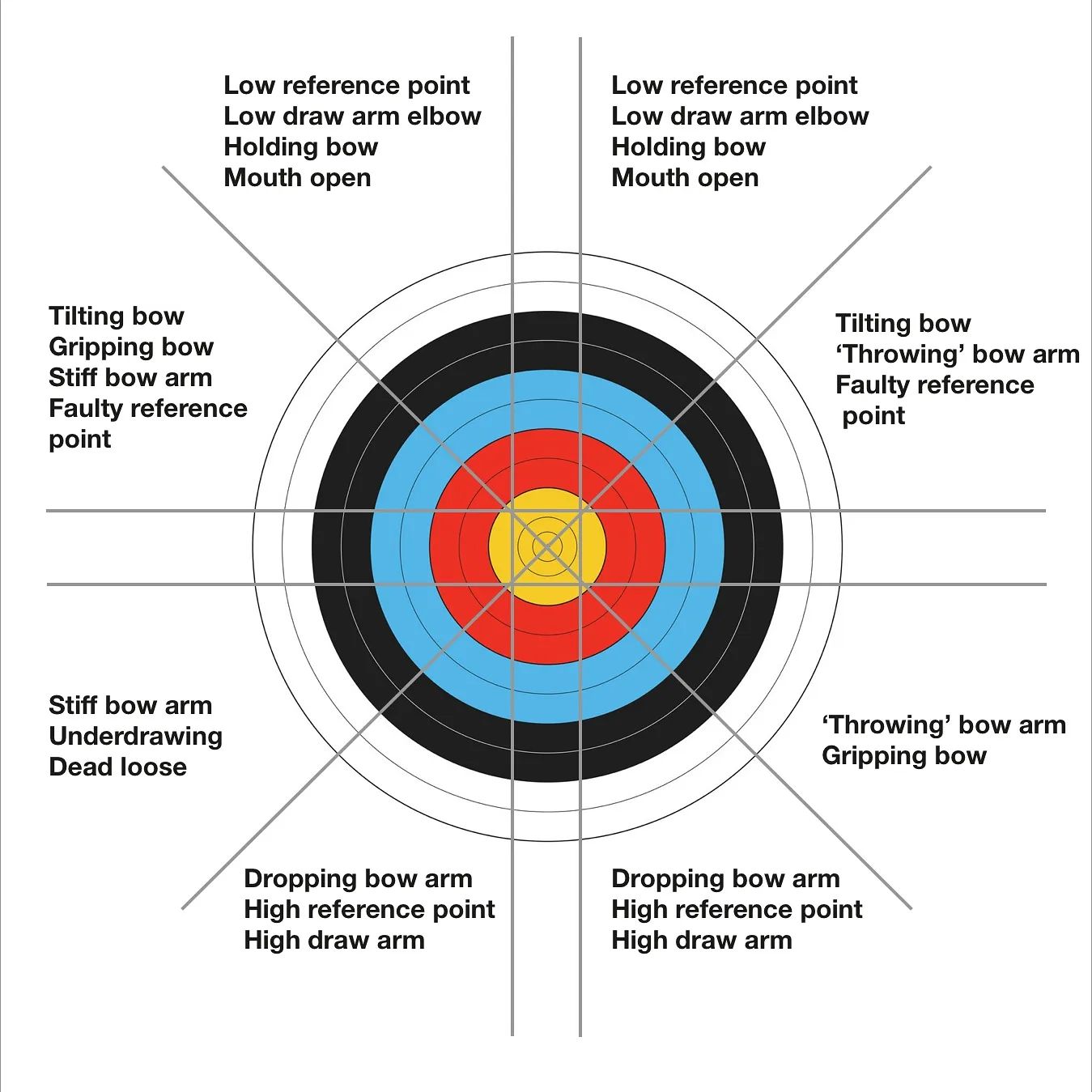 bowmenofwadebridge
•
Follow
A massive congratulations to Chloe, Heidi and Saffron today for representing DCAS at the GWAS Intercounties tournament. Chloe and Heidi both took silver in their categories against some very tough competition and Saffron took gold for her category, as well as winning GWAS Grand Champion! You have done us proud girls. Well done! 🏹🎯🥇🥈🥈😀
View on Instagram |
7/9 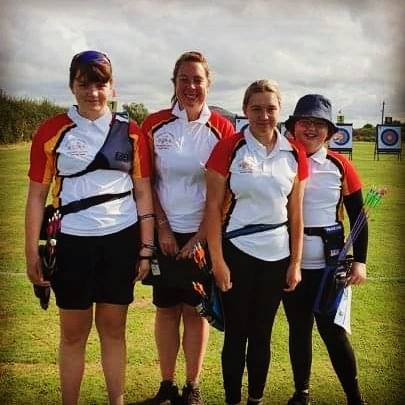 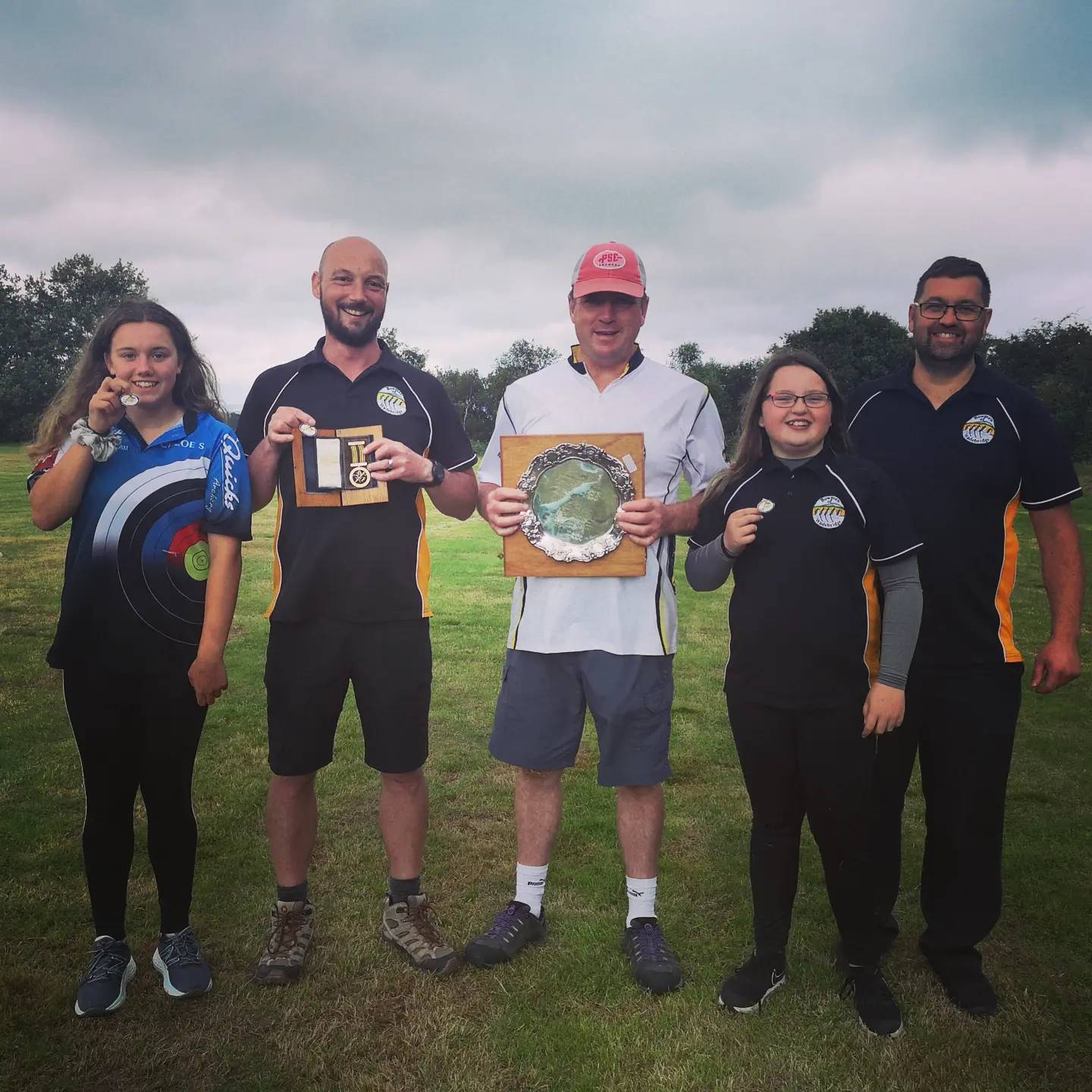 bowmenofwadebridge
•
Follow
Team B.O.W smashed it again today at the DCAS Championships at Exmouth Archers. Chloe and Andrew Scott, Saffron Knowles and Rob Williams all coming away as DCAS Champions in their respective categories. Well done everyone!
View on Instagram |
9/9